Radiation oncology is the discipline that examines, through the use of ionizing radiation, the effects of radiation on the cancer and the behavior of tumors. It also covers research in this field. Radiation oncology has two areas of application: Radiotherapy and Radiosurgery.

Technologically, radiotherapy has been one of the fastest growing fields of cancer treatment in recent years. Successful results have been obtained from modern techniques which treat cancerous tissue with radiation from high-tech devices. 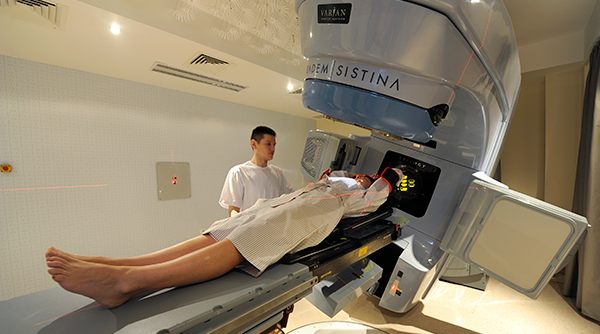 How is the treatment method determined?

There are many factors affecting the treatment method. The main factors are the following: the patient’s age, their general health and the type, stage and position of the cancer. The treatment decisions are taken after an evaluation by many physicians from different branches and each patient is evaluated separately. Therefore, even if cancer patients have the same type of cancer, the treatment of each patient is planned according to their own conditions.

How does radiotherapy affect the patient?

The beams used in radiotherapy affect the DNA in the cell nuclei of cancerous tissues. When the DNA in the cell nucleus is sufficiently damaged, the cells lose the ability to divide. The cancer stops growing and begins to shrink, because dead cells in the cancerous tissue do not regenerate. As a result, many types of tumor are treated successfully. High-dose radiation given during the radiotherapy session kills the cells or stops them from reproducing. Since the tumor cells divide more rapidly than normal cells, radiotherapy kills most of these cells. Although normal cells are affected by radiation, they can recover in a short space of time due to their special repairing mechanisms, which cancerous cells lack. On the other hand, the number of normal cells  surrounding the treatment area is millions of times greater than the number of cancerous cells. In order to protect the normal cells, the total dose of radiation is divided into smaller doses that are given daily over a specific time period. Additionally, physicians do their best to protect the normal tissue and to direct the radiation to the diseased area.

The main purpose of radio surgery (one of the fields of application of radiology oncology) is the orientation, i.e. focusing high energy rays towards the targeted area of the tumor. The final goal is to reduce or destroy the cancer cells with intensive rays, while the surrounding health tissues remain protected from the harmful effects of radiation.

STEREOTACTIC RADIOSURGERY (SRS): SRS treats brain tumors with precise transfer of single high dose of radiation after previous precise implementation of three dimensional planning of the radiation therapy. Using IGRT during the process is of vital importance for precise realization of the treatment.

STEREOTACTIC RADIOTHERAPY (SRT): When the SRS treatment is performed in more than one session (usually 3-5 sessions), the treatment is called stereotactic radiotherapy. The two most commonly used devices for radio surgery are: Gamma Knife and Cyber Knife.