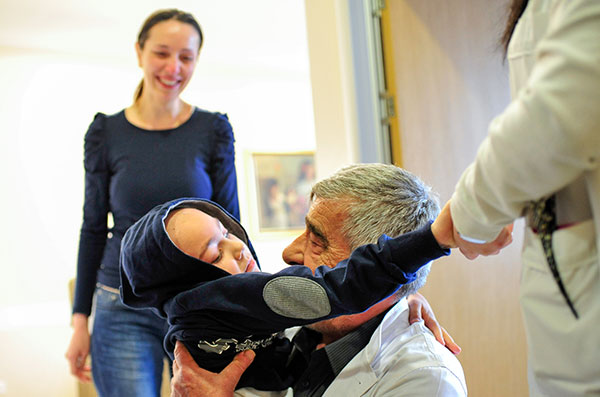 “Please hold my hand. Let’s go together to the power machine. I will receive power on that machine” said the 5-year-old David Domazetovski, who was preparing to go on the last, 31st radiation treatment with the Trilogy accelerator at “Acibadem Sistina” Hospital.
This morning David got up three hours earlier to complete the therapy. After four months of treatment at “Acibadem Sistina” he was preparing to go home to Bitola. Holding my hand really tight, we arrived at the Department of Radiation Therapy. He immediately asked for the physicists who were responsible for his therapy with Trılogy.
„“Where is Yasin? I want him to put my mask of Zorro” asked David. The physicist prepared the mask that David must wear to precisely perform the treatment. The radiation began.
When David came back in the room, Prof. Dr. Jovica Ugrinovski welcomed him. They strongly hugged and David promised to come back to play football with him.

The brain tumor was the size of an egg

On 22 December 2014, after being diagnosed with brain tumor with the size of an egg, David Domazetovski was urgently hospitalized. Despite the high risk of intervention, Prof. Dr. Ugrinovski successfully removed the tumor.
“If we followed the medical rules, we shouldn’t have operated on David. It's like operating a dead person. However, my instinct and experience gave me the right to enter into the operating room and to operate, even though the chances of survival were very slim. What was crucial? The rate of the intervention was crucial. The fact that the situation worsened at 2 am and we entered the operating room at 3am, only an hour after the incident, gave me hope that I will cure him. The operation lasted about 4 hours, the entire tumor was removed and then the difficult journey that lasted for months followed – getting rid of the machine, starting to breathe on his own, regaining movement in his arms and legs … All teams were included, primarily the anesthesiologists as well as the Department of Physical Therapy” explains Dr. Ugrinovski.

After 45 days David opened his eyes

Each new day was a new spark of hope for the parents of David - Ana and Mihajlo and the entire staff that David will open his eyes.
“He was on life support for 45 days, every day we were waiting for him to wake up. We were great optimists and believers, we had great hope and faith. We thought that this was all normal. We came here each morning at 8 am positive and smiling. We constantly talked, sang and played music to him. All the staff was nice and inclined towards him. The atmosphere was as if nothing was happening. We had permission from the professor to constantly be beside him, to talk to him and encourage him, in one word to feel our presence. Professor Ugrinovski came several times every day to see him and to see if he'd cough. One day, while we were talking to him David coughed. When the professor heard this, he loudly said “Bravo” and was overjoyed. This was the moment we were all waiting for. David overcame everything. He began opening his eyes on the 45th day” remembered Ana Domazetovska with tears in her eyes. From that day, David bravely fought. His condition improved slowly every day. Now, a new battle is awaiting. David needs to return in a few weeks to start the chemotherapy treatment.

Today, the most important thing for David was to go home. He looked forward to see the surprise that his older sister prepared. Along with his mother and his father he collected the toys, which he got as a gift from the employees of “Acibadem Sistina” and left for Bitola.

“I would like to express my deepest gratitude to the management and medical personnel of “Acibadem Sistina” for what they did for us. They all loved David. During his entire stay, he didn’t lack anything. The few months we stayed in the hospital were free of charge. They also covered the costs for radiation treatment with Trilogy. The hospital provided us with the best conditions for David’s treatment, as well as accommodation for us in order to be beside him - explains Ana Domazetovska, the mother of David.